Design a site like this with WordPress.com
Get started
Skip to content
Ian Taylor Uncategorized June 17, 2019 6 Minutes

Earlier this year I wrote a piece for TES explaining a new routine which the T&L team at my academy had introduced the previous summer (follow this link for the TES article). I could have blathered on for thousands of words about tracking the speaker but with a guideline from Jon Severs of about 1500 words there was quite a bit which we couldn’t fit in. Here it is.

Shout out to Doug et al

We first witnessed the technique in action on the Teach Like a Champion website while we were planning and delivering CPD on developing questioning and the routine giving of thinking time across the academy. While we didn’t immediately jump on it, it did catch our eye… one key clip we used was Colleen Driggs effectively demonstrating cold call technique, wait time and track the speaker. Watching this back again has revealed one little scamp doesn’t track the speaker – never noticed that before.

One of the main reasons behind track the speaker is to show that we are being respectful and listening to each other which ties in directly to our core values. I can’t imagine a stakeholder having an ethical issue with asking pupils to show that they are part of a community which consistently demonstrates mutual respect. That said, when I had shared the article on Twitter, there was a comment along the lines of “I wouldn’t send my child to a school doing this”. I didn’t think that encouraging respect and courtesy alongside listening skills would be at all contentious!

As humans we value being listened to. We are hard wired to be able to communicate and this is something of an evolutionary privilege. At some point in your life I’m sure you will have said (or heard if you were getting told off!) something like “Look at me when I’m talking to you” because the lesson being learned is an important one to be reflected upon. Equally important is the fact that if you are paying attention, you are thinking.

When you teach your next class and you are expounding on the wondrous nature of your subject with flair and passion have a good old look at the faces of your pupils. Really look at them and think about how focused they are on what you are saying.

This image is a still from a really short clip titled “4K Elementary school children listening attentively to the teacher in classroom” click on the link and watch it (then come back, don’t get sucked in to watching more clips!)

While being adorably cute, these children are not all listening attentively.  One turns to talk to another, one is head down and focused on writing, another is moving a pen around. Commanding attention is vital and what we know about working memory backs that up.

If we have limited working memory then whatever we are paying attention to will be being combined with information from our long term memory. Given that we know that multitasking isn’t a thing (Learning Scientists digest on this here), making sure pupils stay on task (listening, in this case) is paramount if we are to be able to direct their thinking. For me this is the role of a teacher: you direct the thoughts of pupils until they can perform the same process independently. Listening attentively is an active part of learning.

Here is some actual research!

Research from Conaway (1982) detailed an experiment which demonstrates that better listeners are better learners: 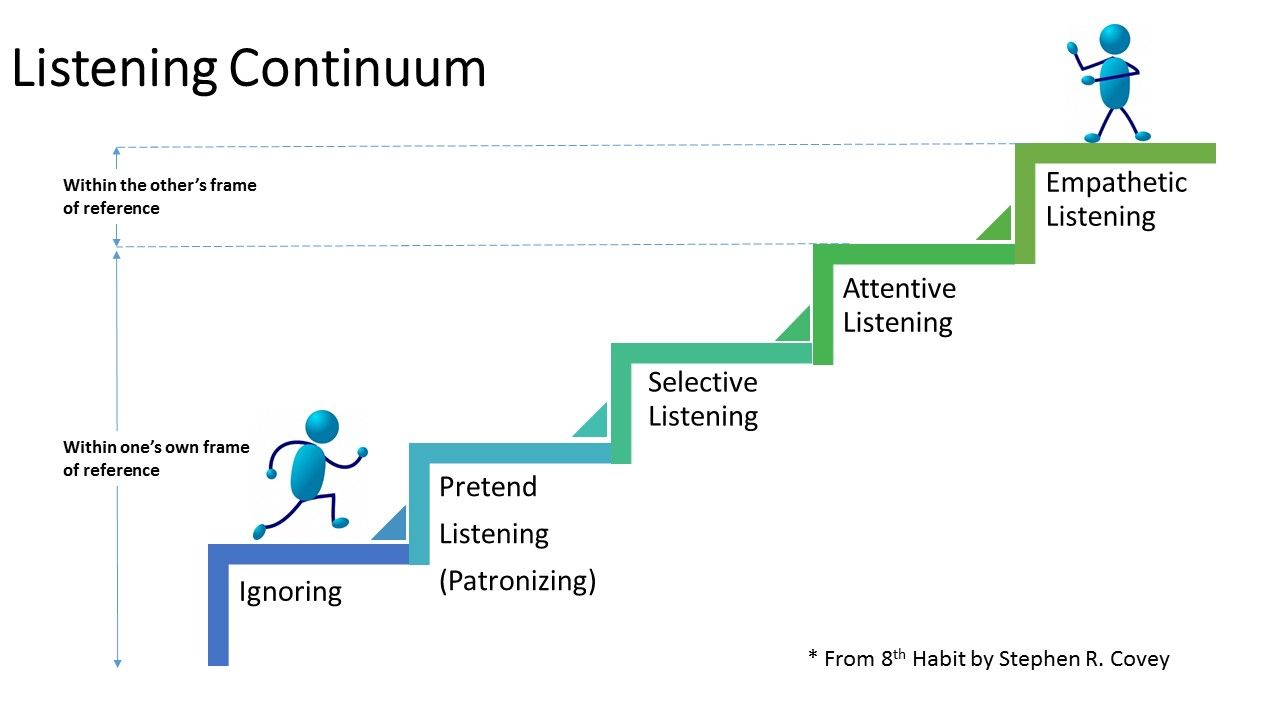 Geary (2008) might describe hearing as being biologically primary knowledge, your brain’s architecture is the result of millions of years of evolution and, for most, is hard-wired with the knowledge of how to perceive and interpret sound and this manifests before a baby is even born. However, listening is when you focus your ability to hear, when and why to listen should be taught more explicitly.

Cognitive load theory (CLT) also offers support for managing the listening of pupils. The working memory is limited in its capacity and whatever you are attending to takes up some of its resources. If a pupil is playing with a pencil, or gluing in a sheet or staring out of the window they cannot have maximum attention on their learning. This explains why we now insist on all eyes on the speaker. Equally we insist that hands are down when someone is speaking to the class.

Try this out: If you tell a pupil to put their hand down when they have a question to ask, when you go back to them, more often than not, they will have forgotten what they wanted to ask. While their hand was up, their question, and not your instruction was occupying their working memory. I tell pupils it’s like having an attention switch in your shoulder. Once your arm moves upwards, you switch off your outward attention; you have stopped listening with the intent to understand. While tracking the speaker doesn’t guarantee that pupils will be listening attentively, it certainly increases the probability.

Even though tracking the speaker cannot guarantee 100% attention as a pupil could be watching you intently but imagining they are somewhere else. It is, however, a pretty good bet and when the issue in play is attention you need to be tipping the odds in your favour. In his work on whole brain learning , MARGE, Arthur Shimamura highlights the importance of paying attention.

“At any given moment we are bombarded by a multitude of sensations and must therefore attend to relevant facts and information.”

For successful learning to take place, attention must be paid to the stimulus, so with track the speaker we are teaching pupils to direct their attention to what is most relevant to their learning.

The impact we hoped tracking the speaker would have was backed up by comments from pupils a few months after its inception.

The third bullet point was a real bonus. A happy side effect. This was also backed up by staff via a survey which found:

Feedback from a MAT review was also very positive about using track the speaker.

“In all lessons seen, the levels of focus and purpose were impressive. Students listened well to the teacher and to each other demonstrating respect”

Push-back: But what about…

Concerns about tracking the speaker were raised when it came to certain groups of students with suggestions that ASD students, in particular, may be overwhelmed by the attention. Within our school we have a specialist ASD provision unit, and with that a larger than usual ASD population but with the exception of one pupil, all are willing to track and be tracked. It could be that the intense focus on a single stimulus actually benefits pupils who spend a large amount of time being unable to filter all the many different sensations in their environments. For any pupil who requires reasonable adjustments in this matter, we will adjust.

Several people have questioned why we don’t let pupils take notes while they are tracking someone and it is simply this:

Words are ephemeral; once spoken they are gone.

If a pupil focuses on writing a note, they cannot attend to what is now being said and it is gone forever, or you have to have it repeated and waste precious time.

If notes are required, we write them together, after the explanations have taken place; as a result, notes are more concise and accurate. If pupils require a substantial amount of information to use as cognitive support this can be handed out and glued in.

Overall, we have witnessed positive changes in behaviour, levels of passivity, communication skills, mutual respect, lesson efficiency and questioning techniques since bringing in track the speaker. There’s no going back!

4 thoughts on “Tracking the Speaker 2: Reasons from Research”