Question 1: How many giraffe are living wild in Africa in the year 2000?

For many pupils this wouldn’t pose too much of a problem but I have had all four of those options suggested when presented with this question. To be fair, there is a fair old bit of cognitive load in this question. A bit of split attention effect (key) combined with some elevated element interactivity… mistakes do happen.

In this example, the numbers are fairly kind but when the numbers get tougher and each little box isn’t worth 1, or 10, or 100… errors definitely begin to creep in.

Try this next one.

Q2: In which year is the concentration of NOx 2.6?

To gain full marks on this question you must be within 1/2 square of the correct value. But what is 1/2 a square even worth? Pupils have to determine the scale used on both axes in order to be able to succeed here, place their ruler on the graph (or track with their eyes) and accurately discern the interstitial values. If your maths isn’t strong, this is challenging!

Bar Models to the Rescue!

The MAT I work for is where the White Rose Maths organisation sprang from and we are lucky enough to receive plenty of support from them. One initiative they operate is Barvember which promotes the use of bar models to help solve problems.

Having had the pleasure of observing pupils using bar models in maths lessons I have found that they can help pupils find values in between the interval values on graphs more easily. This has been particularly helpful with my bottom set Y11 group who have a maths skills lesson every week to help them be more successful in the final exams. 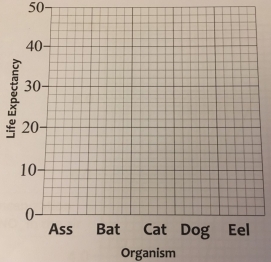 To which I generally say “Which numbers will it be between?”.

At this point, I will draw a bar model for the section of graph which the pupils need to focus on, asking what the value of the bar is and how many little squares are present.

When I follow this up by asking what each little box is worth, every single one of them knows either the answer or how to work it out because they use these models so regularly in maths.

From this point, you can then get them to work out where 15 will be and then plot the bar on the chart. Once they have the scale they’re sorted.

You’ve dealt with the trivial issues presented by integers but then a next level problem presents itself… decimals. Brains are going to melt! Give this a go…

Q4: How much alcohol is left in the blood after 24 minutes? 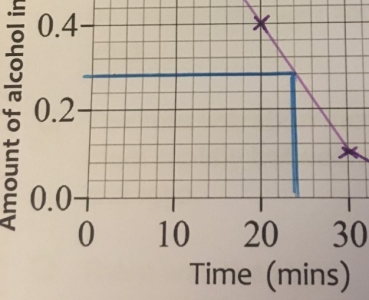 The x axis is fairly friendly looking, a quick bar model (if needed) will sort that out… Great, so I’ve drawn my lines on the graph and we need the value two squares above 0.2… which is 0.4!

Bring Out the Bar!

This problem is high in element interactivity. Two differing scales are used and the y-axis one is not particularly accommodating! So, draw the bar. Well trained pupils will know to divide the bar value by the number of boxes yielding 0.04 as the value of individual squares on the graph. 2 lots of this, added to 0.2 provides the answer of 0.28.

I have genuinely found this makes a huge difference to my pupils understanding the scales and if your maths dept uses bar models frequently, then pupils will be comfortable using them in science concepts.

Bar models are more commonly used with equations and there are fantastic blogs from Ben Rogers (a wealth of ideas here) and Gethyn Jones on some examples which I have used to great success in lessons.